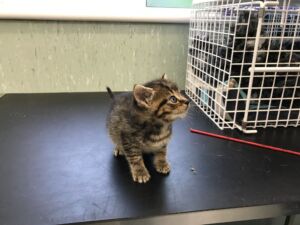 The RSPCA is caring for a six-week-old kitten which was found tied up with a plastic bag with bits of old newspaper in West Norfolk.

The RSPCA is now appealing with anyone for information about the kitten to contact them.

Animal Rescue Officer (ARO) Naomi Sadoff, who rescued it, said: “This poor kitten had been tied up in a plastic bag and dumped like rubbish on the street. She was lucky someone found her when she did or she could have suffocated, starved or been thrown in the bin. Thankfully, a dog walker spotted her and contacted us.

“We know that some people may be struggling to afford to care for their pets at the moment but there is never an excuse to abandon an animal like this and tying this poor kitten up in a plastic bag was callous and cruel.

“I’m now appealing for anyone who may have seen anything in Broad Grove on Sunday to please contact the inspectorate appeal line on 0300 123 8018.”

The young kitten has now been taken to the RSPCA Block Fen Animal Centre in Cambridgeshire to be looked after.