Police in Norfolk and Suffolk stopped almost 250 vehicles and detected over 300 offences, after targeting drivers of Heavy Goods Vehicles (HGVs) as part of an operation supported by Highways England. Operation Tramline saw police provided with an HGV tractor unit by Highways England, which allowed officers to carry out patrols across the strategic road network in both counties and focus on offences committed by lorry drivers. 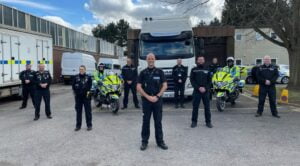 The initiative took place last week, between Monday 8 March and Friday 12 March, and involved officers from the Joint Norfolk and Suffolk Roads and Armed Policing Team, with enforcement taking place on the A14, A11, A12 and A47. The HGV tractor unit, which was driven by a police officer, provides an ideal vantage point meaning officers can look into cabs of other lorry drivers or looking down at cars or vans. Supporting officers would then be on hand to stop any offenders.

A total of 248 vehicles were stopped, including 135 HGVs and 86 smaller goods vehicles.

307 offences were detected and the drivers in question were issued with Traffic Offence Reports (TORs), some having committed more than one offence.

256 TORs were issued in respect of the following offences:

Sergeant Scott Lee-Amies, of the Joint Roads and Armed Policing Team, said: “This was an extremely successful week of action, with the sheer number of offences detected highlighting why it is so important for us to carry-out operations such as this.

“Although we have carried out this type of initiative before, this was the first time under the national banner of Operation Tramline and we are very grateful for the support of Highways England in providing us with the HGV tractor unit free of charge.

“The HGV cab provides officers with an ideal vantage point to spot drivers committing offences and provides us with another means to enforce the law with this specific group of road users, who due to the size of the vehicles they are in control of, pose an added risk to other motorists and also themselves if they are committing offences whilst driving.

“We will continue to do all we can to provide enforcement and education around the ‘fatal four’ main causes of fatal and serious injury collisions, which are drink/drug driving; speeding; using a mobile phone; and lastly, not wearing a seatbelt – which unfortunately always seems to feature heavily when we hold these operations.”

Lorraine Willis, Regional Safety Coordinator for the East of England at Highways England, said: “Hundreds of thousands of drivers use our roads every day and the vast majority are sensible behind the wheel, but some are putting themselves and others at risk.

“Highways England’s priority is to try to ensure everyone using or working on our network gets home safe and well, and to enable our police colleagues to protect everyone from unsafe drivers and vehicles. There is no excuse for driving tired or driving an unsafe lorry or other vehicle, and we will not hesitate in taking action against those who flout the law on the Strategic Road Network.

“By supporting Op Tramline in Norfolk and Suffolk, working with the Police and sharing intelligence we help make Britain’s roads even safer.”

Norfolk’s Police and Crime Commissioner Lorne Green said: “Throughout my term in office, improving road safety has been one of my top priorities. For the drivers to be committing offences that put the lives of themselves and others at risk is unacceptable and this is no different for HGV drivers transporting goods around our county. It is disappointing to see the volume of offences committed during this short period of time, which in itself demonstrates how valuable operations such as Tramline are.

“There is simply no excuse for flouting the law and I want to send a strong message to drivers of all vehicles that Norfolk will not tolerate careless driving and behaviour that puts any driver and other road users around them at risk.”