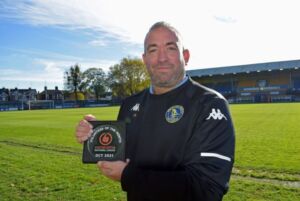 The man behind King’s Lynn Town’s Under-13s has won a top football accolade.

Stuart Gallon, who manages the young team, has been named Volunteer Of The Month by the National League for October.

He has had a long association with the club first playing for the Under-16s and then the reserves before ending up captaining a team of players including Jack and Charlie Defty, Ross McNeil, Simon Bush, Robbie Palmer and Chris Bacon going an entire season unbeaten and winning two Cup Finals.

After leaving Lynn, he ended up at Reffley and also ran a young side in Dersingham for five years.

The Linnets director of football Robbie Back asked Stuart to take on the young side last season and they have gone from strength to strength since, topping the Junior Premier League Cup Group and winning the first two games of the JPL Midland League

Stuart said he was surprised to win the award thanking King’s Lynn Chairman Stephen Cleeve and his team for their support. He added: “I did not realise how much time and effort it takes to run a JPL side and neither did my wife Julie, so getting recognition like this makes it all worthwhile.”