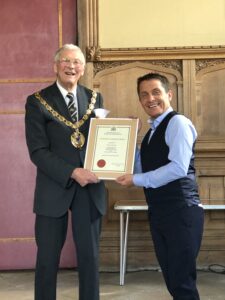 Breakfast show presenter and Radio West Norfolk boss Simon Rowe is receiving a special award for his support to the local community.

He is being presented with it by the Mayor and Deputy Mayor of King’s Lynn and West Norfolk to mark the word he has done to support good causes and unite local people.

Borough Mayor Harry Humphrey said: “Simon has been part of, and broadcast to, West Norfolk for nearly a quarter of a century. In that time, he has raised nearly £500,000 for charity. He could just sit back and play music on the radio, but he chooses to do so much more and continues to make a valued and positive contribution. I thank him for the work he does and the influence he has used to benefit people in our community.

Simon said: “I’m honoured to be receiving this award. It was my last day on air on KL.FM when I discovered the Mayor was bestowing this on me.

“Being on the radio and doing the job I love for the last 24 years has always been about so much more than just playing music, I wanted to change peoples’ lives. I’d like to thank the many people who have supported me along the way with their generosity, without them we would not have achieved what we have done. Long may it continue.”

A special message from Simon is below