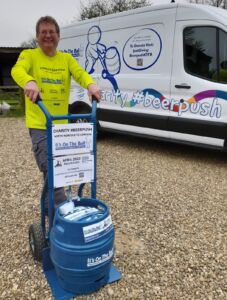 A West Norfolk brewery is to push a 75kg barrel of beer all the way from its Hindringham base to St Bartholomew’s Hospital in London,  a journey of over 200km to raise awareness of testicular cancer and the work of Norfolk cancer charity It’s On The Ball.

David Holliday, from Moon Gazer Ale, said the challenge started with a comment online. “It all started when I rather casually quipped on social media that if Moon Gazer won the public vote for East of England Co-Op’s Producer of the Year award that I would push a barrel of our charity ale Tobi’s Tipple – which we brew for It’s On The Ball – all the way to the oncology team at St Bart’s.  The hospital treats many young men from Norfolk for testicular cancer and it seemed fitting to make the journey to them.”

Unfortunately for David, once the challenge was out there, a few people commented it would be an awesome thing to do, and there were a couple of offers of help. So, he decided to commit to carrying out the challenge anyway regardless of the outcome of the vote.

The 9-day trip was originally planned to take place in 2020 but the pandemic made it impossible and so it now starts on 31 March.

“It has taken an awful lot of planning. For starters choosing a route which is safe to push the barrel along –I’m not sure the authorities will be keen to see me pushing a barrel beer along the M11 – so the 201km zig zags its way through the towns and villages of East Anglia.” 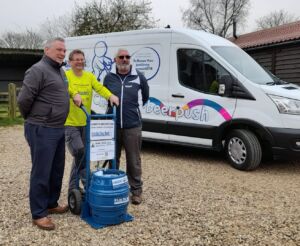 Part of the planning also involves raising awareness of testicular cancer with groups along the route – calling in to businesses and sports clubs to chat about this killer disease – and of course pubs and breweries will provide great stop off points.

Awareness is the key, since 98% of testicular cancer can be cured if caught in time – the trouble is not enough people know about it – and that’s why the brewery hope that the beer push will help raise awareness.

The charity promotes monthly checking – as early diagnosis is the key to the 98% survival rate, and late diagnosis sadly all to often leads to death as David explains:

“The hope is that the beer push will get people talking – it’s more about raising awareness than anything else.

“No young man needs to die of this disease but sadly they do simply because they are not diagnosed soon enough.  By getting people talking about testicular cancer we can spot symptoms early and 98% can be cured – that’s why we promote monthly checks – since a delay of just 4 weeks could well be a death sentence to fit and healthy men.” 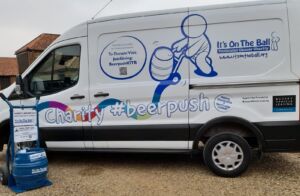 David will be walking alone, although will welcome anyone wishing to join him. He will be supported by Vince Wolvesrton of the Its On The Ball charity who will be raising awareness in the support vehicle bedecked with the charity and beer push graphics which was kindly donated by Busseys Vehicle Leasing, in Norwich, for which the charity is extremely grateful, as Vince explains:

“Small charities like ours are so grateful for the support of the likes of Moon Gazer and Bussey’s, without this our work would be so much harder in spreading what is such a simple message but such a very very important one.”

“If we can get the word out there and get young men to check themselves monthly we will save lives – it really is that simple.”

You can find out more or get in touch with David at the brewery via their website: www.moongazerale.co.uk  or following the #beerpush and #testicularcancer hash tags on social media.