Bronze for LGBTQ+ support at the QEH

The Queen Elizabeth Hospital in King’s Lynn has received the Bronze Rainbow Badge Award recognising its dedication to improving access to healthcare for LGBTQ+ people and creating an inclusive culture. The trust became one of 10 selected nationally earlier this year, to pilot Phase 2 of the Rainbow Badge scheme. 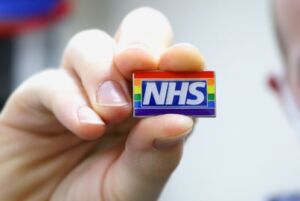 Earlier this year, QEH became one of just 10 Trusts selected nationally to pilot Phase 2 of the NHS Rainbow Badge scheme which benchmarks NHS organisations for their work on LGBTQ+ inclusion. The Bronze, Silver and Gold awards are linked to objectives; ensuring Trusts are implementing the relevant staff training, monitoring, inclusive policies and support for LGBTQ+ staff and patients to drive a supportive workforce and clinical environment.

The Bronze Rainbow Award recognises a number of actions QEH has taken, including training on the needs of LGBTQ+ service users, launching a Transgender Policy, and the Trust’s volunteer-run LGBTQ+ and Allies Network which works to encourage respect and equality for everybody working at QEH. Along with the assessment, the Trust received an action plan to support its work to further overcome healthcare barriers for LGBTQ+ people as part of the next phase of its work to create an inclusive culture for patients, their families and staff.

The NHS Rainbow Badge was widely introduced to NHS organisations in 2019 to promote a message that health services are open, non-judgemental and inclusive places for LBGTQ+ people. The scheme was designed to show that the staff member wearing the badge is somebody you can talk to about issues around gender identity and sexuality. More than 1,880 QEH staff have signed the pledge to wear the badge.