Defeat and departure at the Norfolk Arena

The club has made the move on the back of a 58-32 thumping by Wolverhampton in their second home meeting of the season on Thursday. The club management team have said: “There is no fallout with Craig and we sincerely wish him all the very best for the season ahead. “We want Craig to go away and become the Craig we know he can be, he’s a great rider, but sometimes you have to make decisions which you feel are right for the club and for the rider. “We will be finalising his replacement overnight and updating supporters accordingly.” 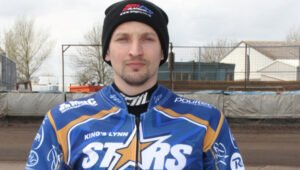 Meanwhile, club co-promoter Dale Allitt offered an apology to supporters in the aftermath of the defeat. “We need our fans more than ever at this moment in time and we apologise for this performance by the team,” he said. “It’s not good enough and we know that but we have started to try and repair the damage immediately. “We are a team and by that, I mean riders and management and we all stand up and take responsibility for this. We apologise and we urge all our fans to stay with us. It’s a short season and we need to try and make the most of it.”

The Minors and Brady Stars were outclassed in every department by a Wolverhampton side who are strongly fancied for success this season.