Did you struggle to get fuel at the Weekend? 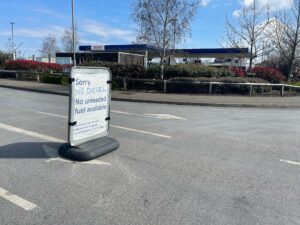 If you struggled to get fuel in the area this weekend, you’re not alone as shortages were reported at some local petrol stations. The Tesco store at Hardwick was one of the stations that had a sign outside saying they had no petrol or diesel. It’s believed to be due to environmental protests that have been held at oil refineries around the country since Friday. Protesters from Just Stop Oil were obstructing access to refineries and over 200 people were arrested.

The scene at Tesco on the Hardwick, Sunday afternoon above.