Happy Birthday and thanks to the NHS

On Monday 5 July 2021, the Borough Council of King’s Lynn & West Norfolk and Alive West Norfolk marked both the 73rd birthday of the NHS and thanks to the NHS, social care and frontline workers day.

Special rainbow flags were raised above council buildings across the borough, including King’s Lynn Town Hall, Alive Lynnsport, The Walks, King’s Court, Mintlyn Crematorium and the resort in Hunstanton. 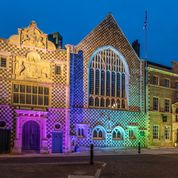 Cllr Stuart Dark MBE, Leader of the borough council, said: “It’s so important that we mark not only the 73rd birthday of the NHS but gratefully acknowledge the incredible, challenging work that the NHS, social care, frontline workers and volunteers have done locally for all of us during the pandemic.

“I stood with borough council staff to take part in the national 2-minute silence, observed by all borough council-owned buildings, at 11am and raised a glass when the Mayor toasted the NHS at 1pm.”

Cllr Harry Humphrey, Mayor of King’s Lynn & West Norfolk who joined the Nations Toast on borough council social media channels at 1pm, added: “We have valued the NHS ever since it came into being in 1948 but even more so in the last sixteen months. Today was about showing our gratitude and appreciation to all the NHS, social care and frontline workers and remembering those who have lost their lives in the service of others.”

The Mayor, Leader and Chief Executive of the borough council met with the vaccination team on Monday afternoon at an event organised by Alive West Norfolk.

The event was held on the 73rd Anniversary of the NHS and was an opportunity to thank the team of NHS staff and volunteers for the thousands of vaccinations they have delivered over the last six months as part of the biggest vaccination programme in NHS history.

Neil Gromett, Managing Director of Alive West Norfolk, said: “This is our way of showing our gratitude to the amazing work the vaccination team and volunteers, who have been based at the Corn Exchange for the last six months, have done. The Mayor, Leader and Chief Executive were keen to come and say a personal thanks to the team. I would also like to thank my staff at the venue for organising it.”

In the evening, as King’s Lynn Minster rang their bells 73 times, the Alive Corn Exchange and King’s Lynn Town Hall were lit up in rainbow colours to mark the occasion.