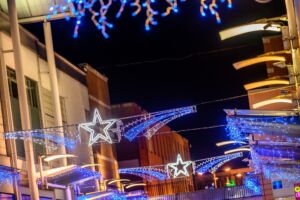 Full details can be revealed of this year’s King’s Lynn Christmas lights switch-on.

Ten-year-old Daisy Mason will press the button to turn on this year’s festive display on Sunday November 21.

The festive fun starts in the Tuesday Market Place at 2pm, with school carol singing and family games on stage.

Boogie Monsters, the UK’s multi-award-winning pop and rock band for kids and families, return to the stage following a successful performance in the summer.

A Christmas lantern parade starting at Stories of Lynn in the Saturday Market Place will end in the Tuesday Market Place. Lantern making sessions are free inside Stories of Lynn on Sunday 21 November between 10:30am and 2:30pm but must be booked in advance by emailing storiesoflynn@alivewestnorfolk.co.uk or calling 01553 774297. Anyone who wants to participate in the parade needs to be outside King’s Lynn Town Hall by 3:25pm.

At 5pm, The Mayor of King’s Lynn & West Norfolk, Cllr Harry Humphrey and Leader of the borough council, Cllr Stuart Dark MBE, will be joined on stage by 10-year-old Daisy for the switch-on..

Daisy, a pupil at Gaywood Primary School, was born 12 weeks early and diagnosed with quadriplegic cerebral palsy at nine months. She completed the 1.2-mile Mini GEAR just three months after major surgery. Daisy has previously climbed Mount Snowdon in Wales and taken part in a triathlon.

Cllr Stuart Dark said: “I helped start the delayed King’s Lynn GEAR event in August and whilst I was really pleased to see everyone meeting up, running together and having fun after so many months, I was deeply moved to see Daisy set off and return across the finishing line winning her personal race.

“I knew then that she would be the perfect person to switch on our King’s Lynn Christmas lights this year, as a fantastic example of the spirit and resilience our great West Norfolk young people have shown throughout the pandemic. I hope those attending get behind her and give her a huge, much-deserved cheer.”

Daisy’s mum, Lucy Mason, said: “We’re delighted to have been invited to be part of this magical event when the countdown to Christmas begins in town. Daisy is following in the footsteps of her Grandmother who turned on King’s Lynn Christmas lights in 1972 as Miss Chamber of Trade.”