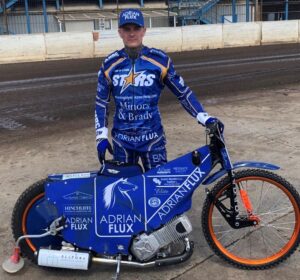 King’s Lynn Stars have confirmed another team change will be in place in time for Monday’s Premiership trip to Sheffield.

The Minors & Brady Stars, who brought Nicolai Klindt into the side this week, have made a second move into the rider market with eight matches remaining.

The club will officially name the incoming arrival on Saturday, but can announce they have parted company with long-serving Lewis Kerr.

The 32-year-old has spent the bulk of his top-flight career with his local club, having started out with the Young Stars in 2010, and enjoyed a successful Testimonial meeting at the Adrian Flux Arena in March.

Stars manager Alex Brady said: “We’ve come to a mutual agreement with Lewi, and we’d like to wish him all the very best and thank him for his commitment to the club over many years.

“I’ve got to know him well ever since my first night at Sheffield last year when Rob Lyon was guest team manager, and then once I took over officially we were pretty close and got on really well.

“Lewi knows he hasn’t been scoring the points either he or we would have wanted, so we’ve reached an amicable decision to part company.

“None of us want the season to drift away, and hopefully what we’re going to announce this weekend will make things very interesting for the matches to come.”