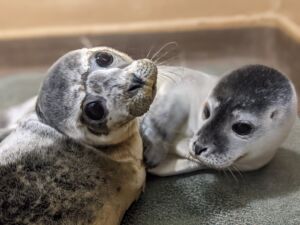 Two orphaned seal pups are being cared for in West Norfolk.

One, called Cupcake, was rescued at Snettisham and thought to be just days old weighing 9.85kg.

A second called Muffin was found at Waxham, and both are believed to have been abandoned by their mum.

Evangelos  Achilleos, manager at the RSPCA Wildlife Centre in East Winch where they are being cared for, said: “Cupcake  was our first common seal pup this seasonand is lucky to have survived and we believe he had been separated from his mum and would have perished without her milk.

“We are doing all we can to make sure he is fully rehabilitated and recovered before being released back into the wild.

“We’ve named him Cupcake  as this year’s theme for common seals is Desserts and Sweets.

“He was our first common seal pup at the centre this season and just a few days later Muffin arrived;  Cupcake and Muffin are currently being fed on a diet of liquidised mackerel. Both seal pups  are likely to be with us for a few months – but we will do all we can to rehabilitate them and get them ready to be released back into the wild!

“This is a really busy time for the centre as we are in the heart of the orphan season and so we are caring for all kinds of wildlife, not just seals.

“Last year the centre admitted 194 seals, from them we had 95 common seal pups.

“Currently the centre has 25 seals in, 23 are grey pups which we have rehabilitated during the grey pupping season and they will be released back to the wild in the next couple of months.

“Since March, the centre has released over 45 grey seal pups.” 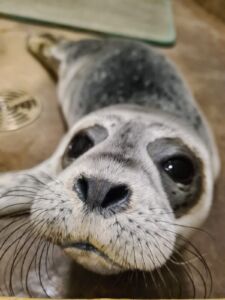