A new signing for the new season 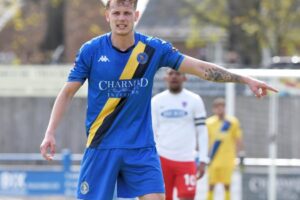 This season’s not even over but King’s Lynn Town FC this morning announced their first signing for the 21/22 season.  Ethan Coleman who once played at the Walks back in March on loan will join the squad from Brackley Town.

The 21-year-old started his career at Reading as a child aged nine and stayed with the club until he played for them at Under 23 level.

Director of Football Rob Back said “We are delighted that Ethan has decided to join us. I know everyone at the club and the supporters wanted us to sign him. He had some very good performances whilst he was here on loan, so we were always keen to do a deal. It’s also great to encouraging that several other National League clubs were after his signature, therefore we are pleased he has chosen to further his career with King’s Lynn Town.”