Nobody harmed on burning vessel

RNLI Wells in multi-agency call to assist with burning vessel 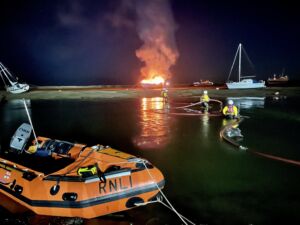 RNLI Wells inshore lifeboat was paged by HM Coastguard at 6.54pm on Friday 15 October, to go to the assistance of a vessel which was engulfed by flames in Wells Harbour.

The volunteer crew of four launched from the boathouse at 7.07pm and headed inland along the channel towards the casualty vessel which was blazing into the evening sky. The inshore lifeboat, Peter Wilcox, arrived on scene at 7.09pm and moored up on the west side of the harbour on the beach bank and away from the burning boat.

The decision was made to put out the fire instead of leaving it to burn out.  The tide was ebbing and the moored boat was now on sand. With the RNLI inshore lifeboat already on the water, there was no requirement to launch the Fire and Rescue Service boat. By using the lifeboat, the RNLI volunteer crew supported the Fire Service by transporting fire equipment and firefighters across the channel to the vicinity of the burning boat. The inshore lifeboat crew also assisted on foot to feed a hose from the fire pump across the channel to the blazing vessel, which the firefighters used to put out the flames with foam fed through it.

Once the Fire Service was satisfied that the fire was completely distinguished, Wells inshore lifeboat crew helped to bring the equipment back across the channel, which was now approaching low tide.

At 10.48pm the Wells RNLI crew were stood down. They walked the lifeboat back to the boathouse through the channel as there was insufficient water in the harbour to motor back.

The lifeboat was ashore at the boathouse by 12.20am. It was sanitised, rehoused and refuelled and back on service again at 12.50am.