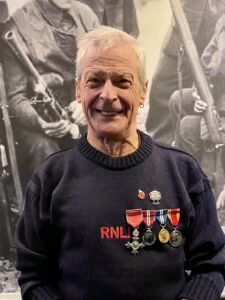 A man who has been helping save lives off the Norfolk coast for over 50 years have been formally presented with his MBE.

Philip Eaglen began volunteering for the RNLI at the age of 16 and is going to continue being part of the Wells crew until the autumn.

The 71-year-old, who lives in the town, first became interested as a 16-year-old working in a souvenir shop on the Quay joining some of his colleagues on the run down to the lifeboat station when the maroon was fired summoning them one day.

A year later, he joined the RNLI and has had many roles during his service including mechanic, launcher, tractor driver and head tractor driver.

As well as being part of the Wells crew, he has covered at other stations around the UK including Harwich, Skegness, and Seahouses which saw him cross the water at Holy Island to put out a chimney fire.

He put out blazes closer to home too as a member of the town’s retained fire crew, once even being dropped off at the boat house by the fire engine after leaving one emergency only to head out to sea on another. 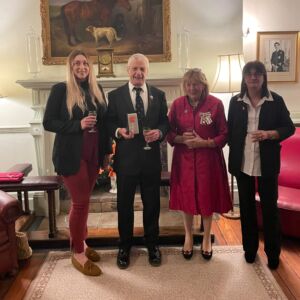 After being presented with his MBE medal by the High Sheriff of Norwich during a ceremony at the Norfolk Club (pictured above), he said there is one thing he will miss when he finishes his service – “The people.”