Two talented film-makers from King’s Lynn who studied at the College of West Anglia, Cameron Summers and Cameron Mattless, have debuted their short film ‘Our Last Summer’  which was shot in and around King’s Lynn on the big screen at the Corn Exchange. 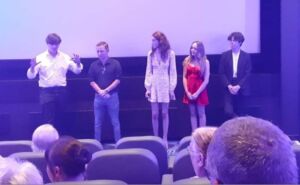 Writers and directors Cameron Summers and Cameron Mattless with some of the cast of Our Last Summer which debuted at the Corn Exchange in King’s Lynn.

The plot follows three teenagers celebrating leaving sixth form on a camping trip, things however take a turn for the worse and it gives them a summer to remember.

Director Cameron Summers said; “It means a lot to show this film here. We are really proud of our cast and what we have achieved.”

As one audience member said: “It’s a breath of fresh air seeing so many young people getting involved and making a film. You should be incredibly proud of what you’ve both done.”

You’ll be able to see their work on Amazon Prime sometime in August, and a sequel could be on the cards too, what a cliffhanger!