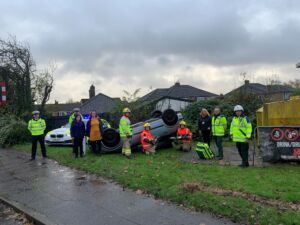 They will also be simulating a crash scene in King’s Lynn’s Tuesday Market Place to remind drivers of the dangers.

Last year, in Norfolk, 46 drivers provided positive alcohol readings, while eight people failed to provide a specimen and four people were prosecuted for being unfit to drive through drink or drugs. Meanwhile, 28 people failed roadside drug tests. As a result, a total of 86 motorists were arrested throughout the campaign.

Inspector Simon Jones from the Joint Roads and Armed Policing Team said: “Drink or drug driving can and often does have fatal consequences and we hope these staged crash scenes will help to reinforce this message to passing drivers.

“We, as the emergency services, have to deal with these devastating situations too often, which is the focus behind these awareness campaigns, to reduce the amount of people seriously injured or killed on our roads.

“However, our experiences as officers dealing with drink drivers in particular tells us that it is often just ‘one or two’ extra drinks that can have a lasting impact on your day-to-day life. We often deal with offenders, who are unaware of the fact they are over the limit, and within a matter of weeks, they lose their licence, their income, their independence which inevitably filters through into relationship issues and more.

“This year we are asking you to consider whether it is worth it. For an extra drink?

“Our message is clear, there is #NoExcuse for getting behind the wheel after having taken drugs or excess alcohol.

“We acknowledge that it has been a tough year and many people will want to enjoy the festive season, which of course we would encourage. However if you are driving to a party or the pub for example, please consider whether it is necessary to have a drink at all.

“If you know you are having an alcoholic drink then please organise a lift home or a taxi before you go out.”