Politics On The Time-Table For West Norfolk Pupils 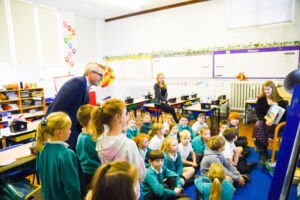 The world of politics is on the time-table at two West Norfolk schools.

Pupils at Snettisham Primary and Heacham Infants Schools have been learning about how democracy works and were visited by their MP James Wild too.

They have been taking part in special assemblies, had an online tour of the House of Commons and had special debates.

It comes after they held heir own votes for Junior Leaders.

Louise Jackson, executive headteacher at Heacham Infant and Junior and Snettisham Primary Schools, said: “Our own pupils have revisited the concepts of democracy they went through while voting for their Junior Leaders earlier this year.

“They have a real interest in the wider subject and it has been the subject for discussion, especially with COP26 taking place as well. We are already looking to debate whether a walk to school week would help our climate.”

Meanwhile pupils have also written to the president of COP26, Alok Sharma, about their climate change concerns.

The schools have also had strong links with the nearby Rewilding Ken Hill project which recently featured as the host on the BBC Autumnwatch series.