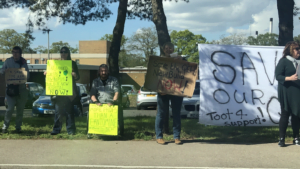 A socially distanced protest has been taking place outside the Queen Elizabeth Hospital in King’s Lynn today to call on MP James Wild to secure funding for a new hospital.  There are also calls for immediate non-loan funding to protect our current hospital until a new one is built.

The hospital was built in the late 1970s and was only designed to last for 30 years.  Today parts of their roof are currently being held up by around 130 steel props.

It’s known there will be funding for a further eight hospitals which will be announced by Autumn and the QEH is doing it all it can to make sure our hospital is one of those.