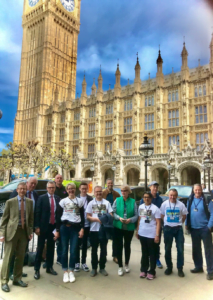 Pic: Save our QEH

Campaigners calling for West Norfolk to have a new hospital have been to Parliament to state their case.

As has been widely reported, the Queen Elizabeth Hospital in King’s Lynn currently has its roof held up by hundreds of props.

An announcement was due in the Spring about the site’s future and people are still waiting for news.

Members of the King’s Lynn and District Trades Council were among those heading down to Westminster to lobby for the case.

It said it wanted to demonstrate the importance of the issue to local people and the hospital was vital to the care of 300,000 people in the area.

A new building for West Norfolk was not included in the Government’s list of 40 new hospitals for the country but an announcement about eight additional new builds is expected later this year.