Rescued after being cut of by tide 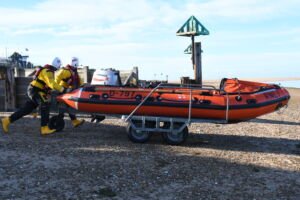 RNLI Wells inshore lifeboat was tasked by HM Coastguard at 4.55pm on 01 January 2022, to assist two people and their dog who were cut off by the tide in the dark on Scolt Head Island, between Burnham Overy and Brancaster.

The D class lifeboat, Peter Wilcox, launched from Wells Lifeboat Station with volunteer crew of three at 5.08pmon the top of the tide, and proceeded toward Burnham Overy harbour entrance.

The two people had set out from Burnham Overy at 11am for a walk with the dog. They were caught out by the incoming tide, which had filled the creeks they had crossed earlier with water.

The Coastguard reported that the casualties had attempted to get back across the creek on the flooding tide. They were cold and wet, but safe having returned to higher ground on the eastern end of Scolt Head Island.

Whilst Wells inshore lifeboat was proceeding towards Burnham Overy harbour, the local Coastguard team managed to locate the two people by the walkers’ flashing light, signalling their whereabouts. The Coastguard was subsequently able to guide the lifeboat to their location.

The inshore lifeboat arrived on scene at 5.38pm having navigated through the creeks. The casualties were wet and cold but did not require any medical assistance. They were helped onboard the lifeboat and taken through the harbour channel to Burnham Overy Staithe, where they were met by the local Coastguard team at 6.05pm.

Wells lifeboat then departed back toward Wells harbour, arriving safely back at the boathouse at 6.30pm.

The inshore lifeboat was then sanitised, rehoused and refuelled, and back on service at 7pm.

Chris Hardy, Wells Lifeboat Operations Manager, said, ‘whilst today’s outcome was a good one, it may have not been the case had the weather had not been so unseasonably mild. It is essential that walkers check the tide times before setting out and return to the mainland at least four hours before high tide. People will undoubtedly continue to enjoy our coastline over this bank holiday weekend, so it is imperative that walks are planned taking the afternoon high tides into account