RNLI Wells inshore lifeboat was immediately paged by HM Coastguard at 2.17pm on Tuesday 19 July to go to the assistance of a man who was in distress off Wells west beach as temperatures soared. 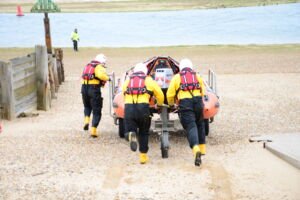 The man in distress was a non-swimmer and in a rubber inflatable ring. He had got into difficulties as he was swept offshore. Three passers-by were alerted to his situation and two of them tried to help, but they were unable to bring him to the beach because of the strong offshore wind. 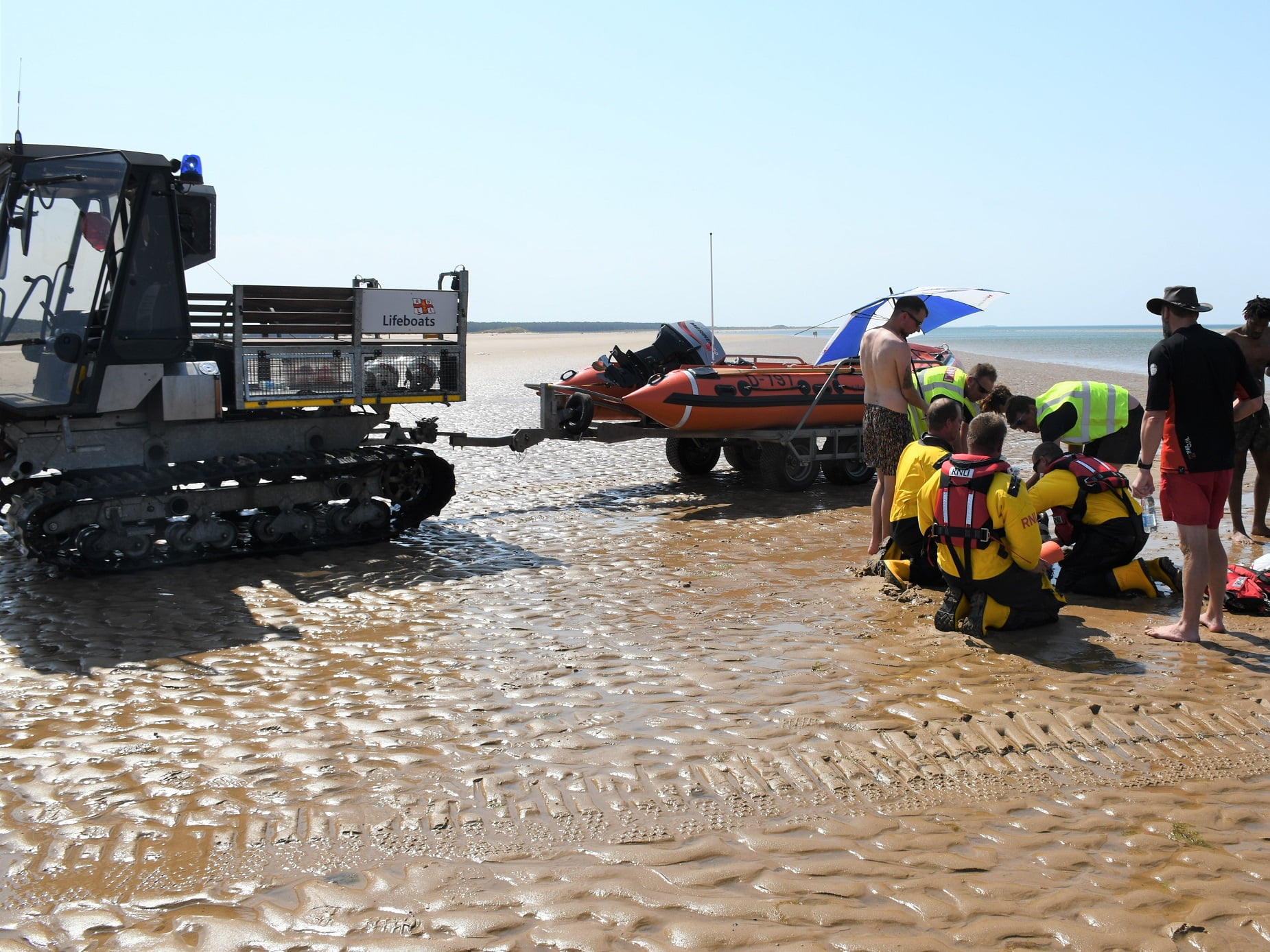 The volunteer lifeboat crew launched at 2.24pm and arrived on the scene at 2.32pm to find that all on scene were accounted for. The man in distress landed on the safety of the beach. He had dislocated his shoulder, was suffering from heatstroke and was severely dehydrated.

Essential casualty care was carried out by the lifeboat crew on scene as the man drifted in and out of consciousness. He was exhausted and suffering from the ingestion of seawater. Medical assistance was requested, and the casualty was subsequently sick and started to feel a little better.

Whilst awaiting medical assistance, the station Softrack launch and recovery vehicle, together with the crew, a stretcher and oxygen, left the Boathouse at 2.45pm and proceeded to the beach where the inshore lifeboat and casualty were located.

The Softrack was on scene at 3.12pm and the person in difficulty, who was still receiving medical attention, was placed on a stretcher in the inshore lifeboat. The Softrack and lifeboat proceeded back across the beach to the new boathouse at 3.30pm. 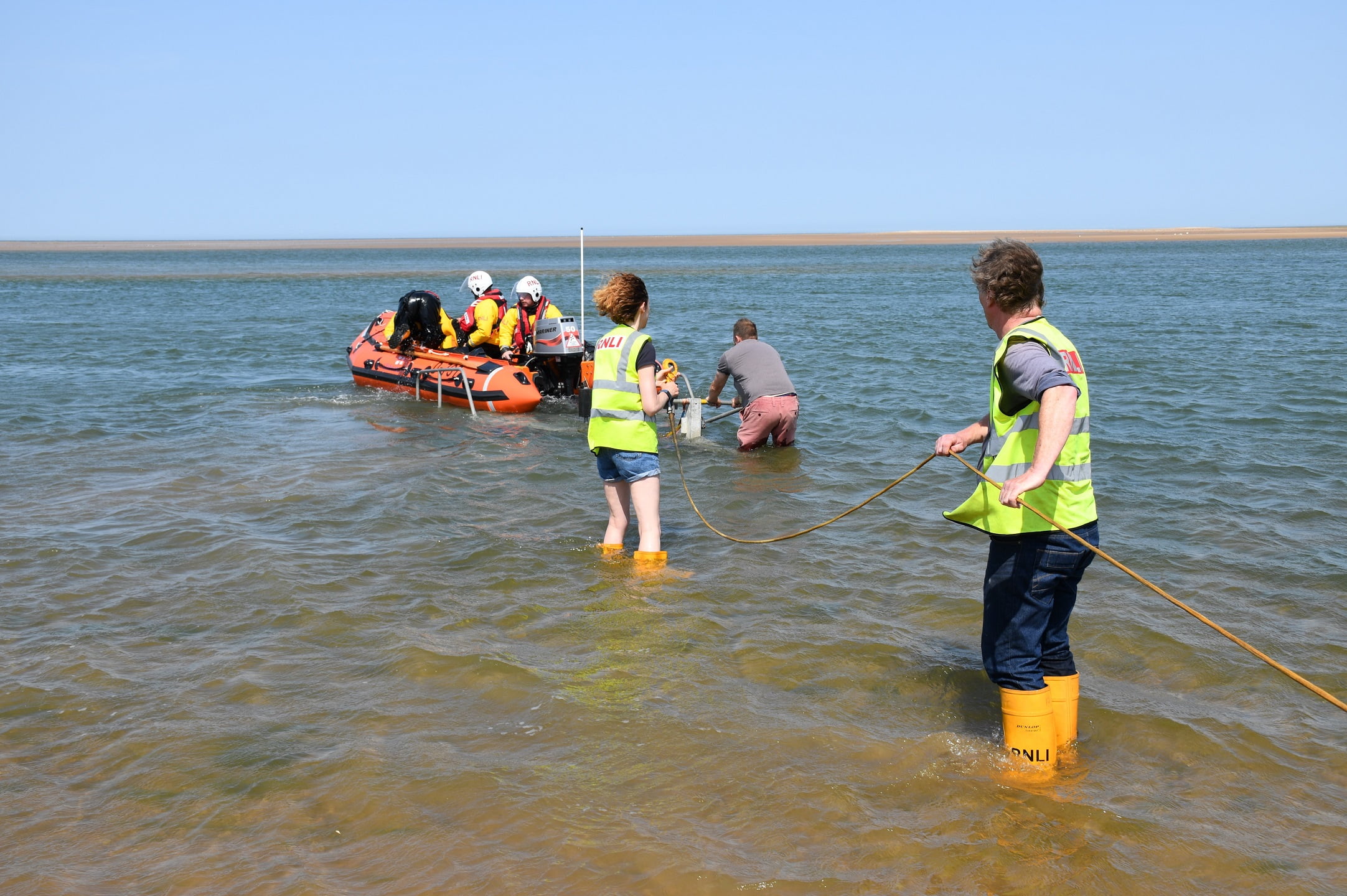 The Softrack arrived back at 3.50pm and the casualty was transferred to the cooler confines of the crew changing room, where the lifeboat crew and the local paramedic continued their casualty care and first aid.

The ambulance arrived at 4.15pm and the casualty started to respond positively. The decision was made to take the person to the hospital for further assessment and treatment.

The inshore lifeboat was stood down at 4.15pm and returned to the current station. It was rehoused in the existing boathouse, sanitised, refuelled, and ready again for service at 4.20pm.

Lifeboat Operations Manager, Chris Hardy, said ‘it is understandable that people want to get in the sea on a day as hot as today, but the currents around Wells are strong and as the tide goes out, they can very quickly carry the strongest of swimmers out to sea. Inflatables of any sort should not be used on Wells beach, especially when there is an offshore wind with the tide going out as was the situation today’.

‘This man’s life was saved today by the quick response of our volunteer lifeboat crew’.