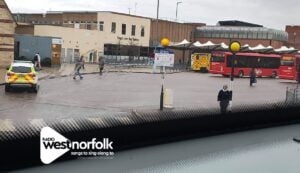 Following the earlier incident in which part of King’s Lynn Town Centre was closed by Police an East of England Ambulance Service spokesperson has released the following statement.

“We sent two ambulances, a rapid response car and an air ambulance to the scene. Sadly, despite the best efforts of everyone involved, the patient died at the scene.”