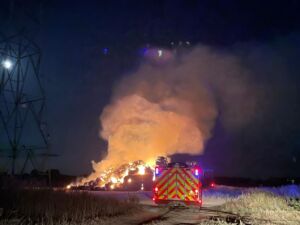 Farm owners are being asked to take extra care, and members of the public are encouraged to stay vigilant, following three deliberate fires at Norfolk farms in recent days.

All involved stacked straw bales and are believed to have been started deliberately, with Norfolk Fire & Rescue Service attending all the incidents.

The first, at 11pm on Wednesday 22 September, was at Tatterford, near Fakenham. It involved 50 tonnes of straw next to a liquid fertiliser tank. It was located on a concrete pad near a country road.

The second fire, on Thursday 23 September at 7.35pm, was at land off Saddlebow Road, Kings Lynn and involved 400 tonnes of straw on a field that had been stacked hours earlier. The straw was located off a farm track and through a locked gate.

On Monday 27 September, at Mill Hill Road in Boughton, 300 tonnes of straw in a stack were set alight at around 7pm.

All three incidents have been recorded as arson.

“Stacked straw is highly flammable and due to the nature of the incidents, we know these fires were all started deliberately. If any member of the public sees anything suspicious when they’re out and about I’d urge them to contact the police on 101 or online,” said Councillor Margaret Dewsbury, Cabinet Member for Communities and Partnerships at Norfolk County Council.

“These incidents waste valuable emergency resources and put at risk public lives. There are steps that farmers can take to help reduce the risk, but the public also needs to help by staying vigilant,” said Assistant Chief Fire Officer Scott Norman.

Farmworkers can take steps to help reduce the risk of arson on their land.