Salsa The Seal Spotted In France 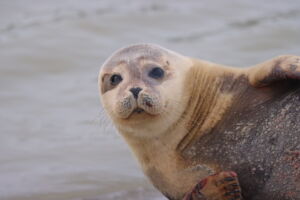 An orphan seal pup cared for in West Norfolk is enjoying a new life in France.

Salsa has been spotted in Boulogne harbour on the country’s North coast where he was snapped by photographer Jean-Luc Bourgain doing a ‘banana pose’ with his flippers in the air.

He was looked after by staff at the RSPCA East Winch Wildlife Centre for four months, before being released back into The Wash in October weighing a much healthier 39.5kg. 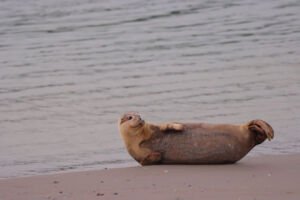 Evangelos Achilleous, centre manager at RSPCA East Winch, said: “We were so delighted to hear that Salsa has been spotted looking so well and that he was all the way over in France enjoying his new found freedom.

“We remember Salsa in particular as he was very cheeky, he would always remove the plug in his pool and drain the water out several times a day so we would have to be very innovative in making sure the water stayed in. We even tried putting weights on the plug but Salsa would usually outsmart us until he was moved into the outdoor pools – which fortunately don’t have plugs!

“Sadly, we do see seal pups coming into our care regularly due to being orphaned, malnourished and more lately dogs attacking the pups, if you are concerned about the welfare of any animal please ring the RSPCA and if you do see a seal please maintain a respectful distance and keep dogs on leads around seals.”