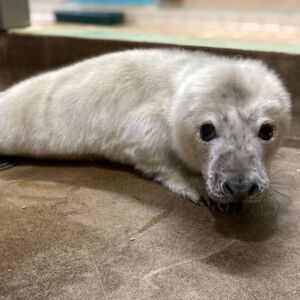 Six seal pups separated from their families during the recent storms are being cared for in West Norfolk.

Centre manager Evangelos Achilleos said: “Storm Arwen has sadly resulted in a number of seal pups being separated from their mums too soon.

“Rescuers have had reports from coastlines of pups which are too young to be away from their mums.

“We even took in one seal pup who was found suckling on the body of a nearby larger dead pup – it’s just heartbreaking.

“We are doing all we can to accomodate what seal pups we can – and before the storm we were already caring for four grey pups and 26 common pup seals.

“It is also estimated that the grey seal pupping season has started two weeks later than last year – which means pupping season is currently underway. 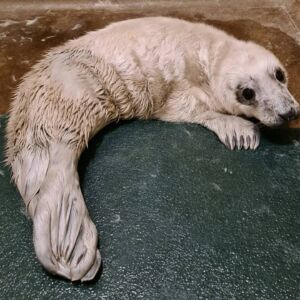 “We are grateful to all our colleagues from the various seal rescue groups such as the Friends of Horsey Seals, BDMLR, Marine and Wildlife Rescue and our officers, who have been attending numerous reports of abandoned seal pups.

“Many of the seals that come into our care at the East Winch Wildlife Centre will be with us for some months before they are strong enough to fend for themselves and be released back to the wild.”

It could take them up to five months to be well enough to be released back into the wild.