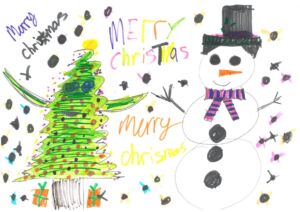 A festive design featuring a snowman and a Christmas tree will be sent out on the official festive card of North West Norfolk MP James Wild.

It was designed by Greenpark Academy pupil Phoebe Gibbs who won a competition to design it.

The first card was delivered to Prime Minister Boris Johnson and Phoebe’s design will also be seen by local residents, community groups, and businesses.

More than 250 pupils from primary schools across the area entered.

James said: “I was impressed by the tremendous response and I’m very grateful to everyone who entered with so many brilliant entries from schools across North West Norfolk. It was a tough choice to pick a winner but Phoebe’s great drawing stood out featuring classic Christmas characters.”

Two runners-up also had their designs on the back of the card. They are Daniel Tansley from Heacham Junior School and Kahlan Coote from Howard Junior School.