Stars ready to cast spell over the Ipswich Witches

The King’s Lynn Stars are preparing for one of the most significant nights in their history when they host Ipswich on Monday Evening.

It’s the first league meeting at the Adrian Flux Arena in over 18 months after last season was cancelled due to the pandemic. 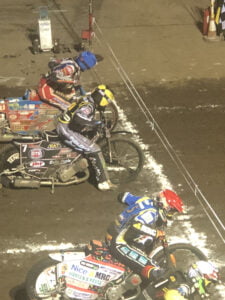 Club owner Keith Chapman says “The Stars can’t wait to welcome fans back for this huge meeting against our great rivals from Ipswich. Hopefully the fans will feel like life is getting back to normal and when the tapes rise on that opening race it will be a very special feeling.”

Chapman is expecting a keenly contested meeting but is backing his Minors and Brady Stars for victory.
“I think we can win this one,” he said. “It would be the perfect night for the fans to be back watching live speedway and for us to beat Ipswich, that’s the dream ticket.

“I think we have a good team and it will be interesting to see how the riders perform.”
Ipswich hand a debut to three-time World Champion Jason Crump who was a Knockout Cup winner with King’s Lynn 21 years ago.

They are without Nicolai Klindt who is set to sit the season out in the UK due to travel restrictions and will be replaced by Jake Allen. Peterborough’s Ulrich Ostergaard deputises for Jordan Stewart who doesn’t have a visa for Premiership racing yet.