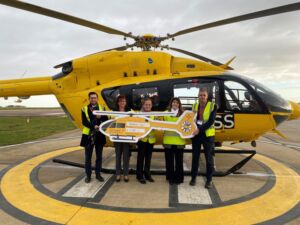 West Norfolk accountants and their colleagues have scaled mountains, run marathons and taken on physical challenges to raise thousands of pounds to help save lives.

Stephenson Smart chose the East Anglian Air Ambulance as their 2021 charity handing over £5000 through fundraising and a donation from partners. 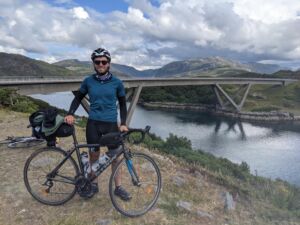 The air ambulance is a charity close to the heart of Stephenson Smart, especially Finance Administrator Sally Legge, whose friend Susan Johnson was attended to by its team in 2019 after suffering a massive seizure relating to her brain tumour diagnosis.

Sally said: “Sue always giggled when recalling this day. She was not in a good way but remembered the stir it caused in Boughton, near Downham Market, when it landed on the nearby cricket pitch and the crew ran round to her house.

“Sue had a great sense of humour and wit and she said ‘ill or not ill it was quite a day for Boughton.’ She praised the crew and couldn’t speak more highly of them. She had enjoyed a long career as a senior nurse and fully appreciated the care given to her.”

Sadly, Sue passed away in September that year.

Lucy Clarke, Norfolk’s Community Fundraiser for the EAAA, said the team (some of whom are pictured above) had made a real difference to people’s lives, having raised enough to fund a mission and more. Each mission on average costs around £3,500.

She said: “It was wonderful to welcome colleagues from Stephenson Smart to our base and say a huge thank you. They’ve certainly inspired me for New Year resolutions and I can’t wait to see this brilliant team again in future events.”

Mike Andrews, Managing Partner at Stephenson Smart said he was proud of the team’s achievements. ““We are very lucky in our company that we have lots of budding sports people and some extremely keen and proficient runners.

“I know that some of these events were pretty gruelling for them with some difficult conditions, but the whole team were really determined to make as much money as possible, especially because the last couple of years have been extremely hard for charity fundraising in the current climate.”