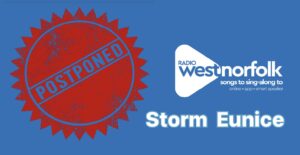 Work begins over the weekend to clear debris and carry out repairs after Storm Eunice disrupted West Norfolk.

Blocked roads, fallen trees, loss of power and the closure of events and businesses contributed to a challenging day for the area. 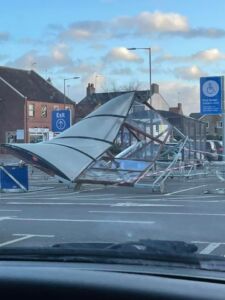 The wind damaged a structure in the car-park at Tesco in Gaywood, King’s Lynn (pictured above), and the electricity supply was lost in a number of areas including parts of King’s Lynn, Tottenhill, Outwell, and Coxford, near Fakenham.

Public transport was disrupted with no rail services between West Norfolk and London King’s Cross with all trains terminating at Cambridge, delays and cancellations of some bus services, the suspension of the Excel bus service between King’s Lynn and Norwich for much of the day, and no flights leaving Norwich Airport.

At Hunstanton, the promenade flood gates were shut. High tides were already predicted and those, combined with the high winds, means the gates are likely to remain closed for a few days.

Many events were also cancelled including the King’s Lynn Mart, Circus Mondao at Knight’s Hill, the energy efficiency roadshow at Hunstanton, the Village Market at North Wootton Village Hall, and the Sandringham Estate was also closed to the public. Recycling centres in West Norfolk were also shut.