A King’s Lynn schoolgirl is taking on a charity challenge to say thank you to St John Ambulance.

Elodie Blackmore, nine, from St Martha’s Catholic Primary is going to run 21 miles which is the equivalent of Dover to Calais aiming to complete the challenge by the end of the year. 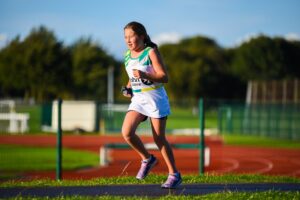 Volunteers from the charity treated her after she fell over on her way to see the Linnets play at The Walks. “When I arrived, they treated me and were very kind and made me feel better,” said the pupil at St Martha’s Catholic Primary School in Gaywood.

“My dad told me about the work of St John Ambulance and the fact they are volunteers, so I decided to run the distance of the English Channel to help them. It has been a bit tough and the weather isn’t helping but I will carry on,” she said.

The organisation is very special to the family as they also helped her dad David when he collapsed while running the London Marathon and was treated for heatstroke.

You can donate to Elodie’s fundraising page here