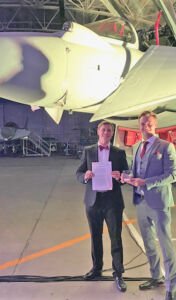 Two West Norfolk teachers have won an award for backing a charity which supports and inspires young people.

Dominic Stannard and Daniel Hudson, from Marshland High School, got the awards from the Jon Egging Trust, or JET, at the charity’s 10th anniversary dinner in front of 250 guests.

It has held a number of sessions at the West Walton school aimed at building confidence and team-work, and developing leadership and communication skills.

The two teachers also promoted the charity’s work in the media and on social media, as well as delivering sessions to around 100 students during the second lockdown.

Mr Stannard said: “It was a massive surprise to be nominated for the award, as in our eyes, it is the Jon Egging Trust and their staff who play the important role. They are the ones who lead the lessons and provide amazing opportunities for our students.

“However, it was lovely to be recognised for the work we put in behind the scenes to put the sessions in place.”

Mr Stannard said the work of the JET was crucial, particularly as more children are struggling with issues of well-being.

He added: “The sessions they provide are invaluable in developing our students, confidence, communication and leadership as well as raising aspirations and well-being.”

The charity was set up in memory of pilot Jon Egging, who died during a display at the Bournemouth Air Festival in 2011, and aims to help young people reach their full potential.