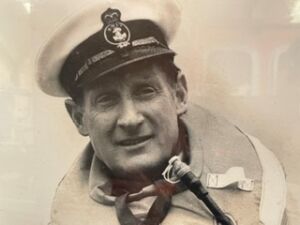 The RNLI station flag is being flown half-mast in Wells in memory of the town’s renowned lifeboat coxswain David Cox, who has died at the age of 96.

During his long and distinguished service, he received 5 awards from the RNLI for courage, determination and excellent seamanship.

David was born in Wells-next-Sea in 1926 into a family of fishermen, a life which he inevitably followed. It took him on transatlantic cargo trips to America, fishing for whelks out of Wells harbour, and in time, he became coxswain of the Wells lifeboat.

As a boy, David would race to the beach when the launch maroons went off from the lifeboat house indicating danger at sea and help to launch the lifeboat. In 1945, at the age of 19, he volunteered as a member of the lifeboat crew, following in another family tradition. In 1960 David took over as Coxswain of the lifeboat from his uncle, William Cox.

His most difficult rescue, for which he was awarded a prestigious silver medal, was on 15 February 1979 for his part in service to the Romanian cargo ship, Savinesti, with 29 people on board. The Romanian ship had engine failure eleven miles off the coast of Wells. The weather was so severe that neither the Sheringham nor Cromer lifeboats could reach the ship.

The Wells 37ft open lifeboat, Ernest Tom Neathercoat, launched and David and his crew reached the vessel, despite the lifeboat’s radar freezing and poor visibility because of the snow. With the assistance of the Humber lifeboat, which escorted the Savinesti to safety, all lives on board the vessel were saved. In summary, David and his crew, all volunteers other than the mechanic, were at sea for 11 hours 24 minutes that night, in violent storm conditions with very heavy swell and unbelievable seas, poor visibility and sub-zero temperatures.

David retired from his service to the lifeboat at the age of sixty in 1986, having handed on his vast knowledge of the sea and seamanship to the volunteer crew members who had joined under him. Before he died, he recorded his memoirs, which have been a fountain of knowledge for the RNLI.

Lifeboat Operations Manager, Chris Hardy, said ‘David was an inspiration as Coxswain to all lifeboatmen throughout the Institution, particularly for his courage and unwavering determination to saving lives at sea off our coastline. He actively continued that commitment throughout his retirement years and was a great ambassador for the RNLI, often recalling in great detail the difficult ‘shouts’ he had taken part in over the years, which totally captivated all those who were listening. David’s time served in Wells will never be forgotten and his longstanding contribution to the RNLI will live on in his memory – he was a legend!’