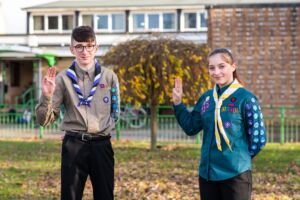 Two West Norfolk students are heading off to South Korea to take part in the world’s largest scouting event.

Springwood High pupils Imogen Allerton and Barney Kivlin will join thousands of other young people at the World Scout Jamboree in August 2023.

The event happens every four years with each participant having to complete a tough selection process including map skills, team-work tests and quizzes plus raise thousands of pounds to be involved.Year 9 pupil Imogen, 13, has been involved in Scouting since she was just a week old – as her parents are Scout leaders.

She said: “I am looking forward to meeting new people from all over the world and getting to see their culture.

“I couldn’t believe I had done it. I thought the selection day went well but as the week went on I started to doubt it and didn’t think I would be chosen. I didn’t want to get too excited as I would have been disappointed if I didn’t make it.

Meanwhile Year 10 pupil Barney, 14, started Scouting as a Beaver when he was six-years-old, then moved on through Cubs and Scouts.

He is now an Explorer and helps out at his local cub pack as a young leader.

“During the selection weekend I was just being myself, our team worked well together.

“I am most looking forward to travelling outside of Europe for the first time to experience a different culture.”

Andrew Johnson, headteacher at Springwood High, said: “We are very proud of Imogen and Barney, it is a massive achievement to be selected for this once in a lifetime experience.”