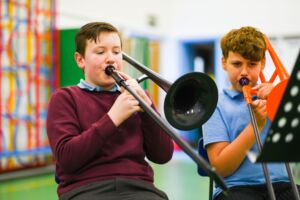 Pupils at more West Norfolk schools are getting the chance to learn a musical instrument with the help of the area’s Royal connections.

The West Norfolk Academies Trust aims to encourage more young people to get involved after gaining a grant of £2000 from the Royal Warrant Holders Association.

This means it can extend the tuition offer – currently available to its six primary schools – to those schools which feed into the Trust’s high schools.

Rob Galliard, director of primary music, said the scheme began in 2019 to build on the current practice of giving primary school pupils one term’s experience of playing a musical instrument.

He said: “We use the same whole class opportunity but, after a term, select a group of pupils who show an aptitude for music to begin tuition on an orchestral instrument. Of those who started in 2019, nearly 50% are still playing and beginning to join bands and orchestras.”

The scheme began in the Trust’s six primary schools – Clenchwarton, West Lynn, Snettisham, Heacham Junior, Walpole Cross Keys and Gaywood. It is now being extended to those primary schools that feed into the Trust’s high schools: Springwood, Smithdon, St Clement’s and Marshland.

The Royal Warrant Holders’ Association charity fund is established by companies which hold royal warrants and specifically helps small local good causes with grants of up to £2,000.