VE Day to be marked in Tower Gardens, King’s Lynn

The 76th anniversary of VE Day will be marked by a short service in Tower Gardens tomorrow morning. 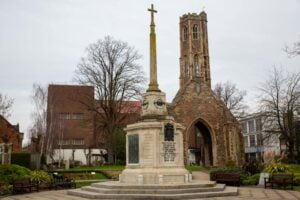 Mayor of King’s Lynn & West Norfolk, Cllr Geoff Hipperson, will arrive at the war memorial at 10:50 am to make his opening remarks. This will be followed by a short service of commemoration in recognition of the 76th anniversary of VE Day, led by the Mayor’s chaplain, Rev Canon Fr Adrian Ling, parish priest of All Saints Church.

The Mayor will lay a wreath on behalf of the borough followed by a representative from the Royal British Legion.