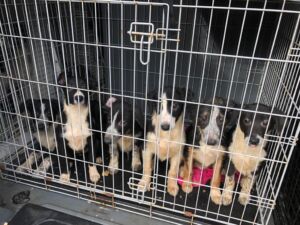 The team at West Norfolk RSPCA are helping to care for almost 30 young collie dogs which have been signed over to the organisation’s care.

The former owner from Lincolnshire was struggling to look after them all and the RSCPA stepped in to help.

Most of the dogs were aged between seven months and two and a half years old, although there were also some puppies aged between six and 14 weeks old.

The team in West Norfolk are looking after some of them while others have been taken in by other RSCPA groups in the region.

RSPCA Inspector Emily Astilberry worked with the owner to get the dogs signed over and said: “This is something we sadly come across too often in the RSPCA when pet owners have just got too many animals and with such large numbers they just can’t give them the care they need.

“There’s no question that they love their animals – but with just so many – owners find themselves struggling to cope with the sheer numbers. 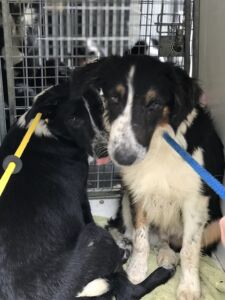 Carl Saunders, general manager at Eaubrink Animal Centre, said: “We have taken on 11 of the dogs and, although they are all very sweet and timid, we are going to have to spend a lot of time with them to get them to trust us and to learn how to navigate the outside world.

“Our dedicated staff have already got to work in gaining the dog’s confidence and socialising them as well as providing treatment for their fleas and giving them a good bath.

“Some of the dogs were too scared to even walk and would just crouch on the floor. It was heartbreaking to see. But little by little, day by day, they are coming out of their shells and learning how to play and some have even started walking on their leads – which is just so heart warming to see.

“It’s going to be a long road before they can be rehomed – but I am certain they will make absolutely wonderful pets in the future.”

The RSPCA says they will continue to care for the dogs at the moment and ask people not to contact them about these dogs, although they will be available for rehoming at a later date.